There was never any doubt what Harbor would ask for when I started planning on how to decorate his room. He had high hopes that the carpet would be changed to fake grass and the walls would be painted like a stadium. I am all for creating rooms that children will love but also, realistically they will also need to stand the test of time. I wanted to crate a space that was very much football focused but could grow as he does. That is the reason that all the things that are permanent like walls and furniture are more of a blank canvas and all the ‘themed’ items are interchangeable.

Harbor has the master bedroom and therefore has the fitted wardrobes and ensuite. We do intend on flipping the en suite into our room at a later date as we are on the other side of the wall. I will go into why he has this room at a later date but in short it worked better for us this way around. (And our bedroom is actually larger and a better shape for how we wish to furnish it)

This is what his room looked like when we moved in. It is pretty standard for a new build property.

I let Harbor choose the paint colour and then basically worked from there. We had tested Oval Room Blue by Farrow & Ball for the living room and Harbor really loved it so it seemed like a good choice for his room. It is one of the blackest blues in the blue range that Farrow & Ball do and I hoped this would make the room feel cosier as it is quite a light space and certainly bigger than any room he has had before.

After Sonny’s bedroom was so well received Rebels Walls got in touch to see if I would like to work with them again. I have been so impressed with the quality of the paper and the ease of hanging it that so it was the easiest yes I have ever said. I went for the Battered Wall design for Harbor’s room. I felt that the blue tones worked really well with the Oval Room blue but also it was reminiscent of an old locker room wall from when Si used to play football. You know, back in the olden days!

We have kept all of Harbor’s boots from the first pair that had studs and it looks really sweet having them up here. I would like to say that they represented progress and growth but we all know I am not really deep like that! Instead they just look pretty cool positioned with all his football books. The shelves are just from Ikea and I painted them in the same paint as the walls.  I was nervous that I should have used a primer first but although it took a few coats it worked really well.

When I first started thinking about how I could make his room football themed I had the idea of displaying footballs on the wall. The plan is that eventually these black and white ones will be replaced with a signed ones at some point. I chose the black and white ones purely for   aesthetics. They are sat on clear ball holders which are amazing and obviously could hold any ball type. 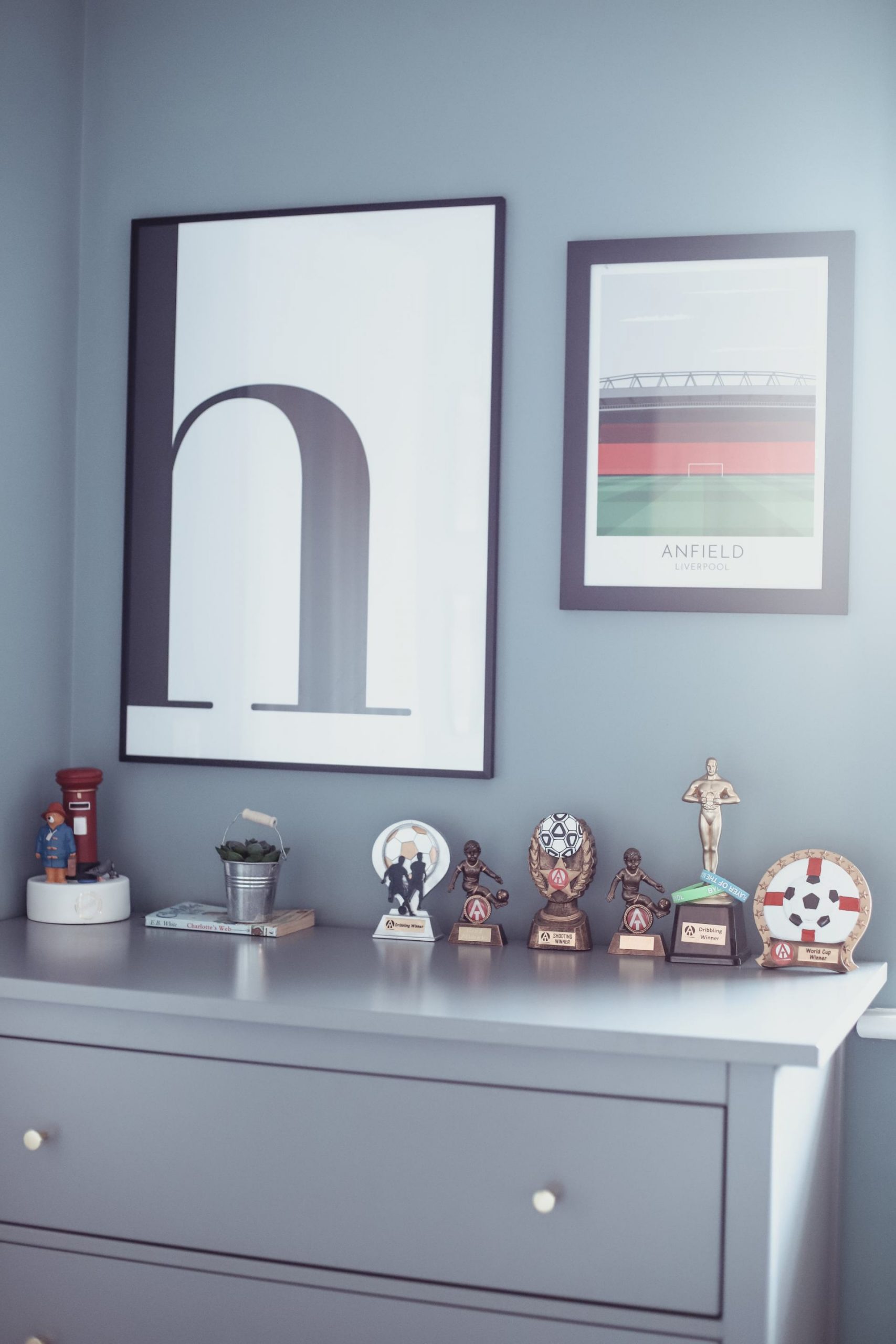 I still need to find a way to display all of his trophies and medals. Most of which currently live in a drawer. At this point you may realise just how much he lives and breathes football. He currently plays three times a week. I have never been a fan of the game but it has proven an excellent way for him make friends in a completely new town and I will admit I get a little too into it on the sidelines! I find children doing well at sport really emotional. They don’t even have to be my own children. Maybe it is just that you can physically see them trying that is so wonderful whereas that isn’t as easy to see with academic achievements. I have gone off piste haven’t I?

I am so pleased with how his room is progressing. As you can see he still needs a lampshade amongst a few other things I have ordered. Harbor absolutely loves it, as do I!