It isn’t any secret that moving house has been really difficult for the boys. During the whole process Sonny would say he was fine about everything but in reality he had started having broken sleep and asking more and more questions about all the things that had upset him in the past. Such as Wilfred, our Basset hound that died last year. It was as if he was feeling unsettled but didn’t know why and so asked about things he knew had made him sad previously. Obviously we have been really aware of making the process as fun as possible, focusing on all the new and exciting things and explaining how change can be such a good thing, but I wanted to really enforce that this new house could be special for the boys. With that in mind my intention has always been to decorate their rooms first and to really spend time working out what they love and what they could grow into.

Sonny is tricky because he just likes what his older brother likes. I am never fully convinced that he really likes football like he says he does. Often finding him secretly playing with toy cars when his brother is glued to a match. So when I see little glimmers of things that are just his interests I grab onto it. That was where the idea of an explorers bedroom began. On our holiday he showed so much interest in where we were and wanted to see a map. Then we sat down together and looked at some ideas. He is 5 years old so I had to help him otherwise we would have ended up with all the walls black (his idea). 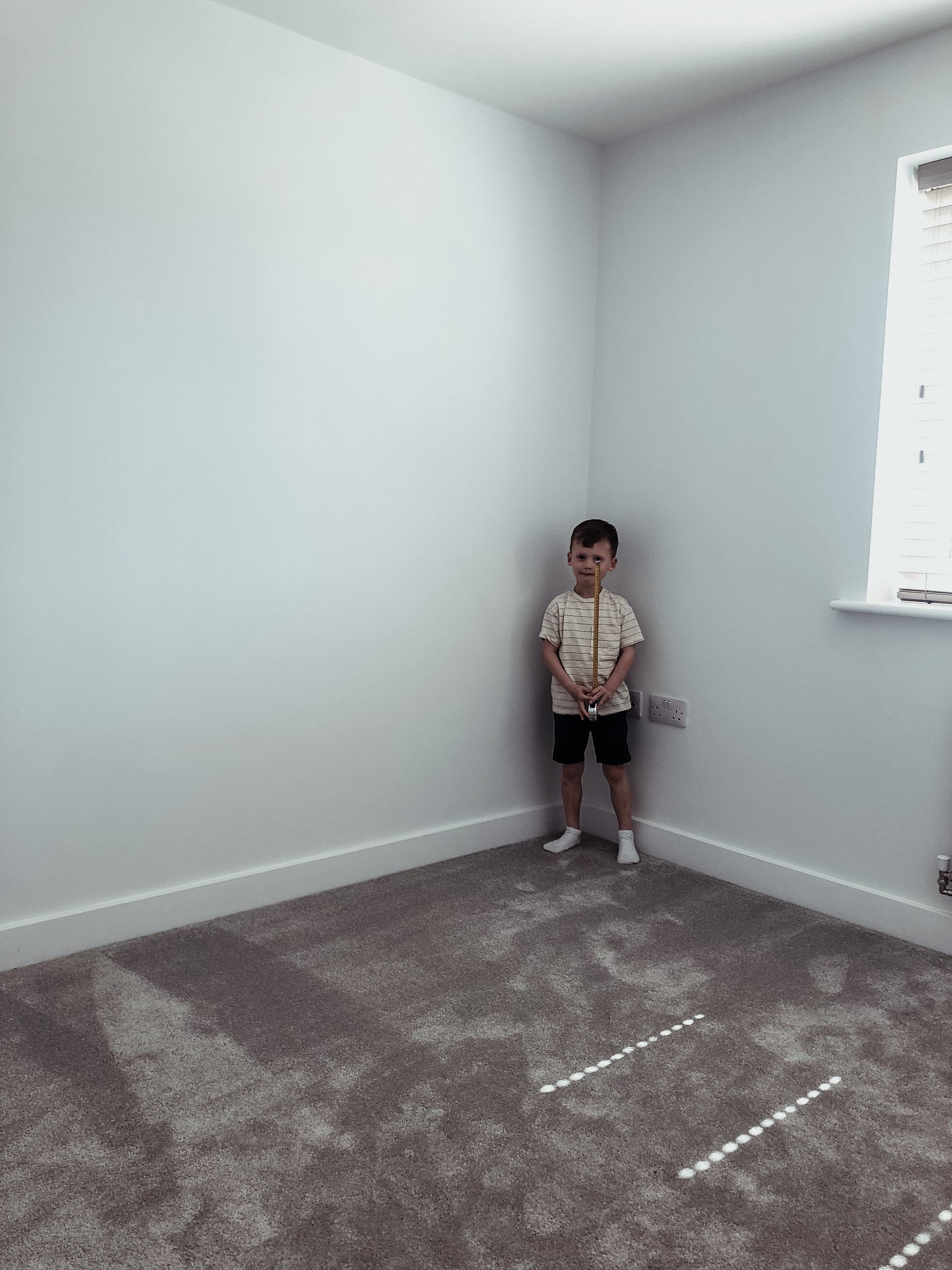 We really started with a completely blank canvas. The beams in our old cottage meant I had steered clear from any patterns or bold prints because the rooms always looked busy as they were. I felt that I shouldn’t be detracting from the character of the property. This house however is perfect for me to be more playful with interiors and I find that really exciting! I feel like things will be really trial and error here. I am not an interior designer and I have never decorated a new property before. 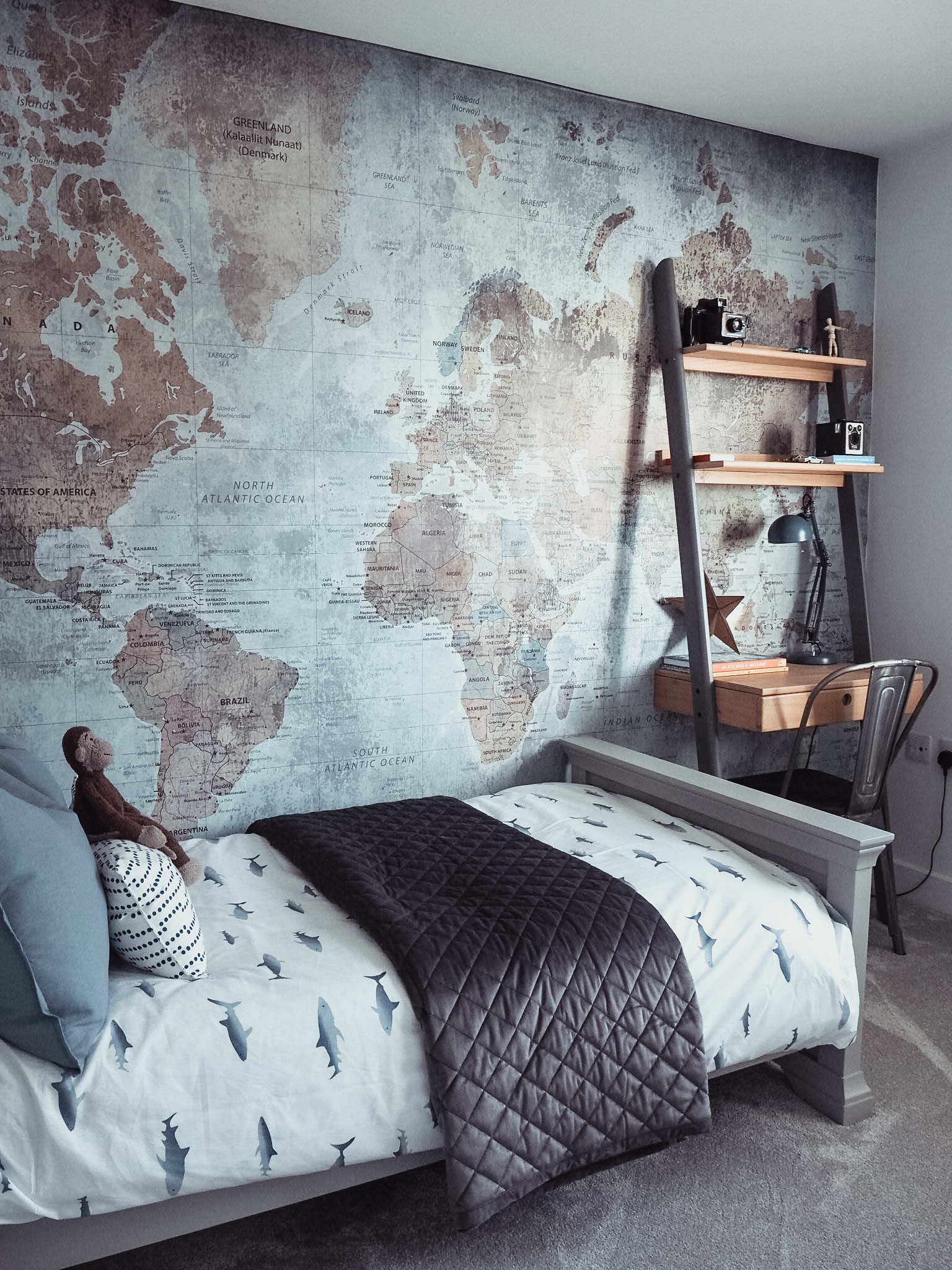 The wall mural from Rebel Walls is what started everything off. I immediately feel in love with it. The pattern is printed for the size of your wall so you don’t lose any of the map and they have loads of amazing designs. I love the tone and the detail. The sea isn’t just a flat colour it has this textured look to it when you look closer. 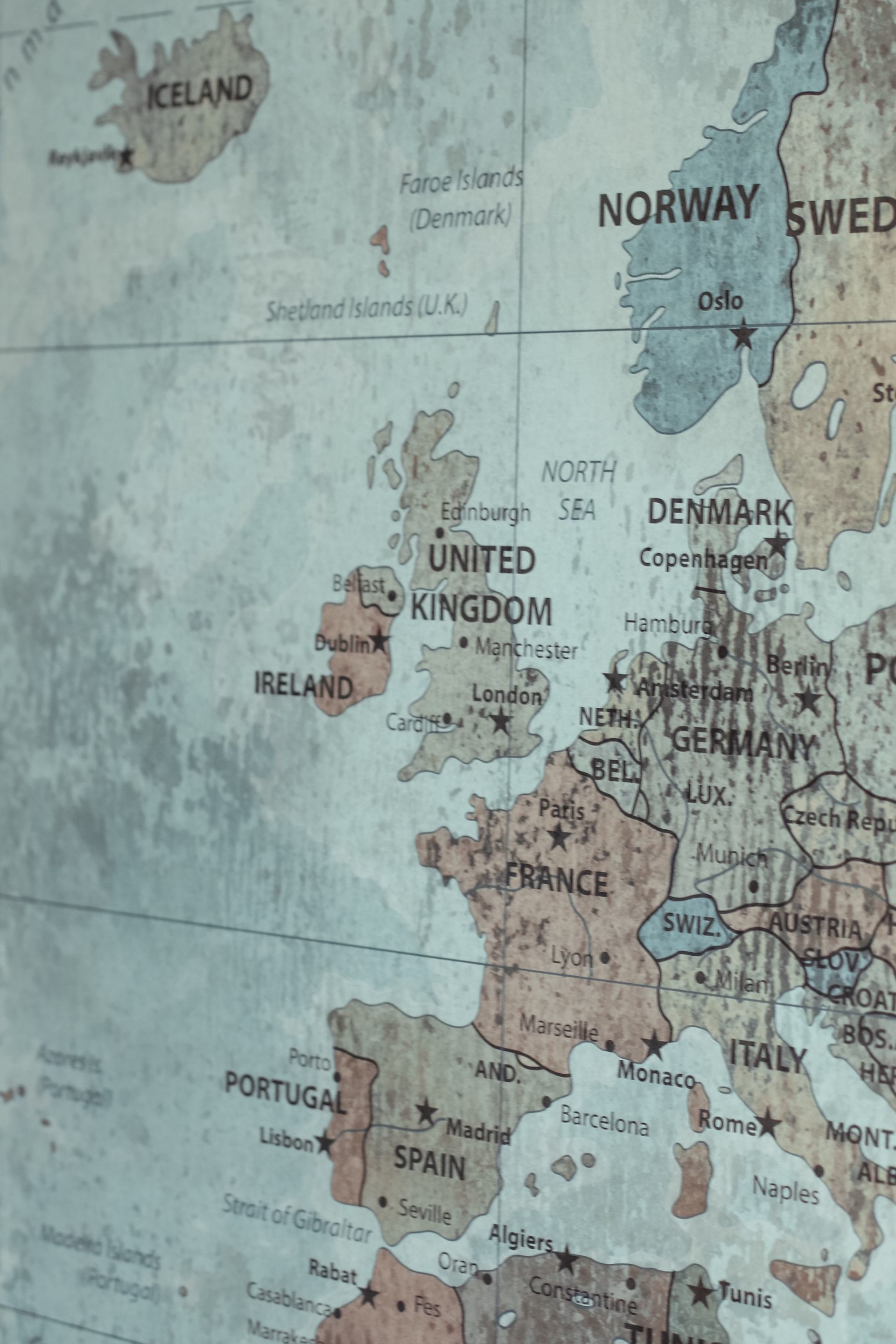 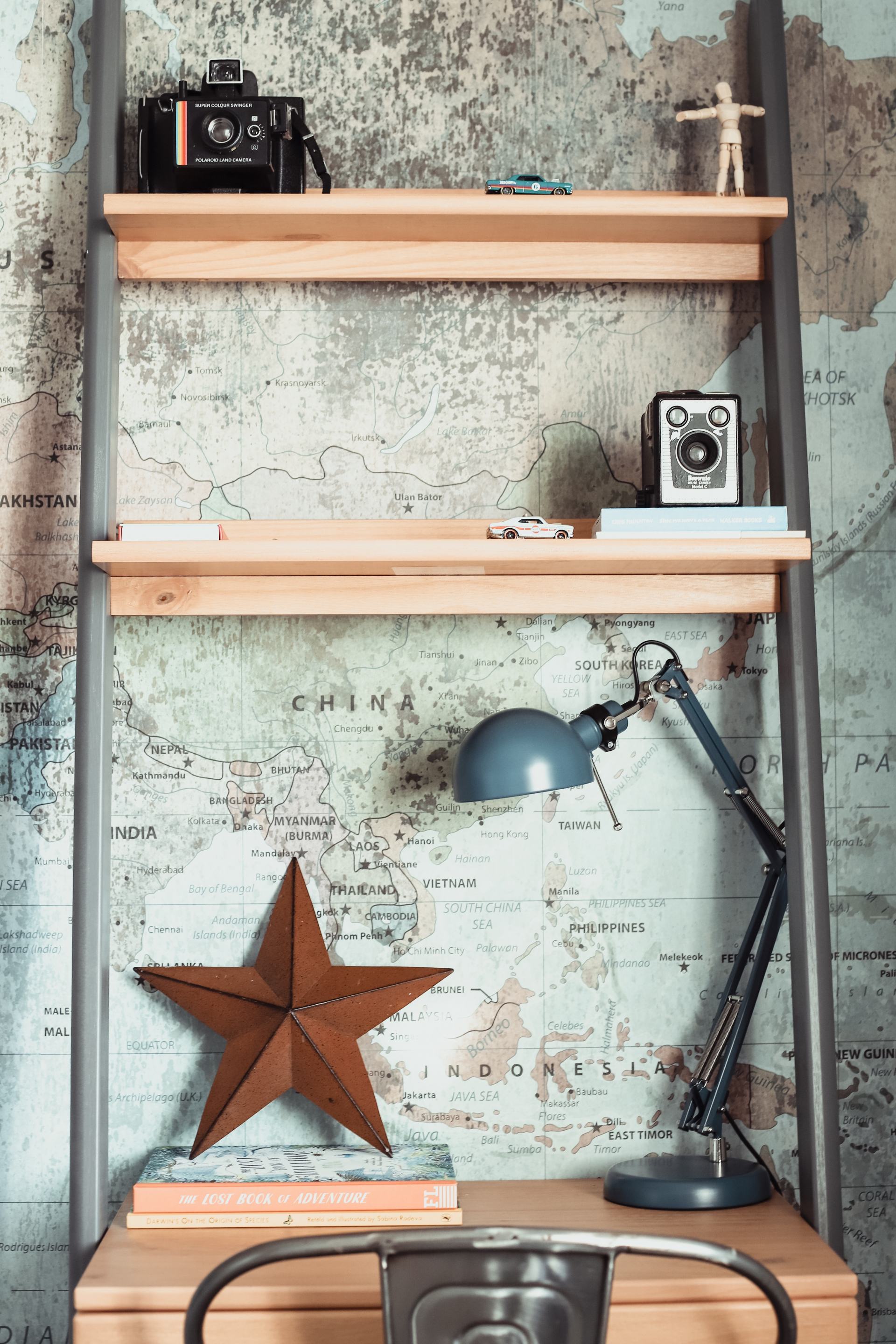 The desk seems a little premature for a 5 year old but he had seen one in another house when we were viewing properties before buying this one and he became absolutely adamant he needed one. I felt like this one from Made.com was a good compromise as it doesn’t take up much space and offers extra storage with the shelves. He is happy to sit here and colour in which is really cute to watch so I am happy I went with it and sacrificed a little bit on toy storage. Instead we have baskets under the bed and the bottom of his wardrobe is housing all the plastic toys which currently works really well. 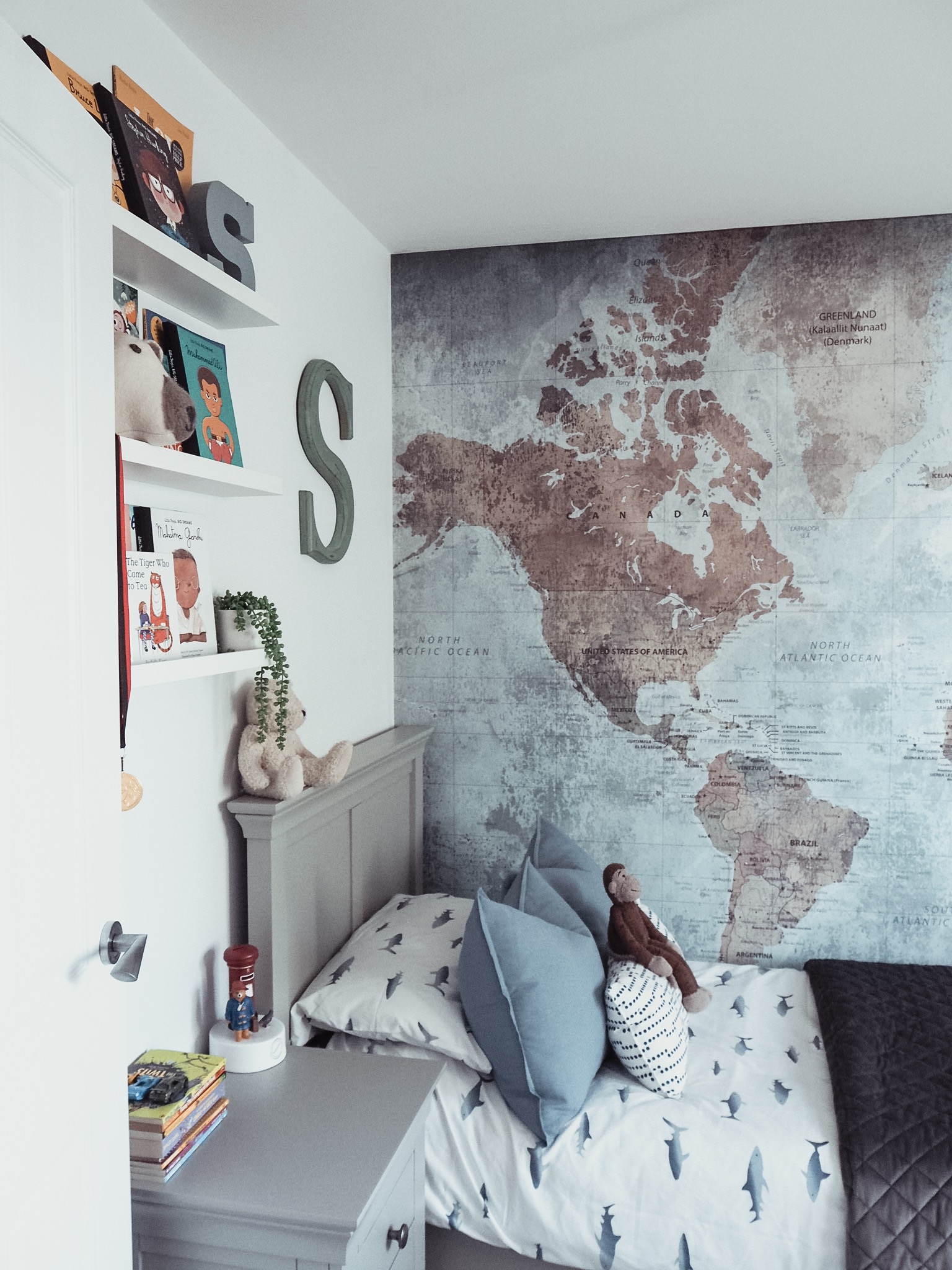 Our old house was so cold and pretty gloomy at times so this new brighter space has been such a tonic. The boys now play in their rooms which never happened in the old house and it makes me a little lost at times. I find myself going and checking on them to make sure they are still there! Although these grey carpets would never have been my choice, they are so lovely for the boys to sit and play on and I think thats why they are spending so much time upstairs now! 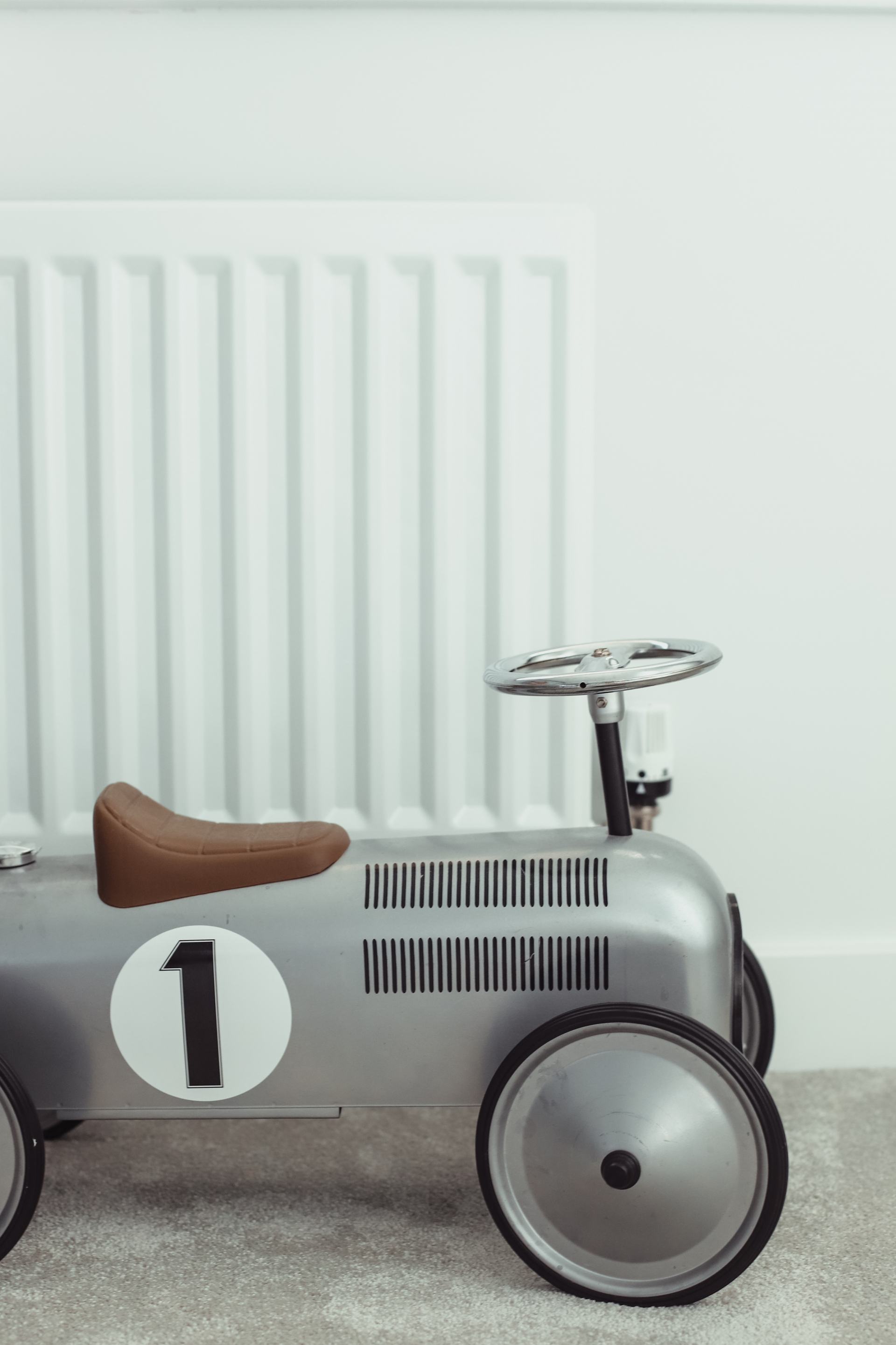 I would love to know what you think! In the meantime it is back to Pinterest to start planning Harbor’s room!